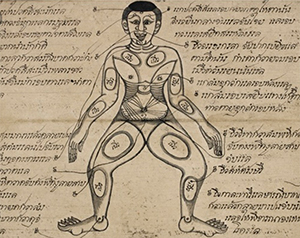 We are delighted to offer Marma Therapy with Dr Donn Brennan amongst other powerful forms of holistic therapies & treatments.

Dr Donn Brennan will be with us for two days in September to begin.

What Are Marmas & How Do Marma Treatments Work?
Yoga settles busy minds, which would explain its popularity. It works by quietening Prana. Prana is understood, in the ancient Vedic tradition of India, as that which moves the mind. It also moves all activities and functions of the body. The common yoga postures and breathing exercises, along with effective meditation, normalise Prana to integrate and still both the mind and body. Returning to activity afterwards you retain a measure of balance and integrity.There is a body of Prana. Surrounding and infusing your body, it connects with mind. It is through this ‘Prana Mayakosha’ that the mind constructs and governs the body. The direct connection between mind and body is this body of Prana. Yoga is a subtle science to enhance and balance this connection and so has the power to heal.

In the ancient health tradition of Ayurveda there was a more direct way to influence Prana for health. This was Marma treatments. Marmas are 108 points all over the body where the Prana is especially lively, creating and organising the surrounding structures and functions.

There are very subtle treatments that work on these points using aroma oils and very gentle touch. This is called Sukshma Marma. Through gentle touch, the flow of Prana is enhanced and made coherent. The consequence of that is to remove blocks, encourage healing and revitalise.

Dr Donn Brennan was one of the first western medical doctors to trainin India in Ayurveda and has also completed an MSc in Ayurveda in Middlesex University, London. He qualified in medicine in 1979 at UCD and then as a G.P. Since 1990 he has worked fulltime promoting, lecturing and consulting in Ayurveda.