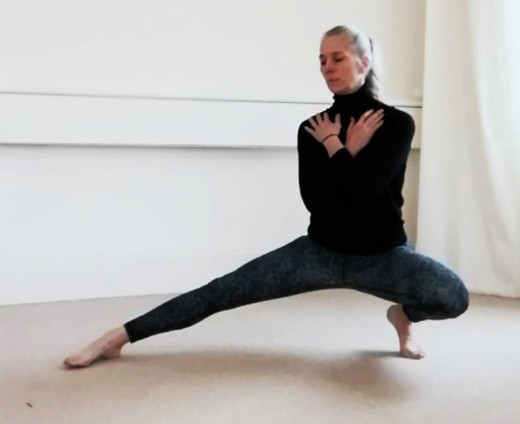 ABOUT
Join us for a morning of Shadow-style Hatha yoga, open to all! No previous experience required.

The workshop is in two parts, with a short break between. Pam will introduce some of the foundational principles of Shadow yoga in the first session, closing with a restorative sequence.

The second session will introduce the first of three fixed forms, the Balakrama, which translates as “strength sequence” or “stepping into strength”.

Shadow yoga is a school of hatha yoga developed by Shandor Remete, based on the classic hatha texts. Having practiced yoga since childhood and studied intensively with B.K.S. Iyengar for some years, Shandor continued to investigate aspects of yoga, including astanga yoga, Ayurveda, the martial arts and Indian dance. This knowledge was instrumental in the development of three fixed sequences (the prelude forms) to develop in students the correct skills for key asanas required for the hatha yoga path to spiritual fulfilment.

Shadow yoga cultivates coordination of the limbs with the breath in a sophisticated and absorbing way. One important principle is that yoga should be practiced in an unobstructed way, and without imposition.

“The right tool applied at the appropriate time in a skillful manner is Hatha-avadhuta yoga, which is the manifestation of the yamas (restraints) and niyamas (observances). Skillful activity is unobstructed, non-harmful behaviour, which brings about the merging of the two opposing energies of the sun (ha) and moon (tha). This is raja yoga or siddha (attained) yoga.” –Shandor Remete, Shadow Yoga, Chaya Yoga.

“The practice of Hatha Yoga is about unfolding the different layers of consciousness that make up the human form. Therefore the practice helps to dissolve the secret of human existence hidden within the folds of the body. These are at times referred to as shadows. I chose the name ’Shadow Yoga’ for this reason.” – YJ Interview, 2017

ABOUT PAM BUTLER
Pam took up yoga over 20 years ago while living in Asia, and found the practice to be an indispensable tool in the face of both physical and emotional challenges. The considered physical movements of asana helped manage challenges such as pregnancies, major knee surgery and even gardening. The mental equilibrium that breathing and meditation bring provided a touchstone during the turbulence of international relocations with children – as well as a social network.

In 2000, she received her teaching diploma from the internationally recognized Sivananda Yoga Vedanta Centre and has continued her professional development in various styles and related techniques. In 2019 she became the only authorised Shadow style instructor in Ireland.