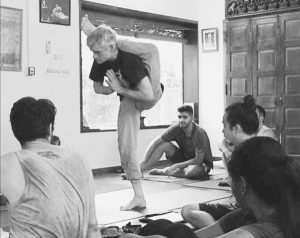 Mark Kinghan began his journey of self enquiry and study of spiritual practices in the early 80’s with the practice of Aikido and Qi gong. He became immersed in Buddhism and completed his first Vipassana course in 1984.

Mark also commenced studies in Acupuncture in the 80’s and qualified with The Acupuncture Foundation of Ireland in 1990 continuing on to complete his Acupuncture Clinical Training in Nanjing China.

He has studied Ayurveda under the guidance of Dr David Frawley and recently has spent a month furthering his Ayurvedic studies in the JSS
Ayurvedic Hospital in Mysore, India. Mark has also studied and qualified in Thai & Aromatherapy Massage.

Marks interest in the internal arts eventually led him to yoga and he completed a 200 hour Teacher Training in the Elbow Room in 2013. His
main yoga practice at this time was in the Ashtanga tradition and he went on to complete a 40 hour training with David Swenson in 2013.

Mark currently teaches Vinyasa Krama Yoga and practices Chinese medicine. We are delighted to welcome him to The Ananta Yoga Studios where he will be teaching Vinyasa Krama Yoga & Qi gong classes. Mark will also be offering Acupuncture in our new clinic.